I've just finishing the following. It's a good book, so feel to read it and enjoy. but it's not perfect.

Julian of Norwich: a very brief introduction, by Janina Ramirez


This book calls itself “a brief introduction”, and it is. Despite its length, it’s a really good introduction for the complete novice wanting more on this important and wonderful writer. The book is beautifully produced with some lovely colour photos. All the photos are well chosen and are discussed in the text.


The book’s principal strength is its brevity. It says virtually everything that needs to be said for the beginner. It is generally well written, so it will be a quick read as well as brief. Chapter 3 on the inherent themes in Julian is particularly good. 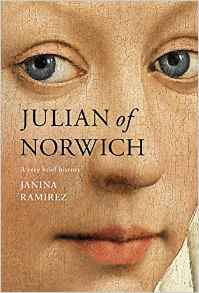 The weaknesses are few. Occasionally the reader will long for a good editor. In a book of fewer than a hundred pages, it’s amazing how often we’re told that Julian lived in Norwich, that it was an important city, that she is medieval, that two recensions exist of the texts, and so on. There are a few howlers: page 14/15 seems to say Edward III was king at Agincourt yet the battle was in 1415 and he died in 1377. ‘In the word but not of the world” comes from the Bible, not Grace Jantzen! The prose is sometimes a bit Latinate and occasionally downright clotted. But it’s worth the read nonetheless.


I’m personally not sure of Ramirez’s idea that Julian can be identified from this distance of time. And it’s unwise to ignore the near-universal medieval practice of giving a women religious a man’s name, and vice versa. The simplest and best explanation of Julian’s name is to say an anonymous lady became an anchoress in St Julian’s Church and so took the Church’s dedication as her name is, or that posterity gave it her.


Omissions? The only obvious oversight is the failure to mention some of the better previous editions. Evelyn Underhill’s century-old edition is peerless despite its age and has a superb introduction that displays an insider’s insight; and Clifton Wolters’ translation (in Penguin Classics) is probably the best, and his introduction is essential reading for background context and understanding.
Posted by Revd_Paul_Monk at 12:36