Good Friday 6: His side and heart 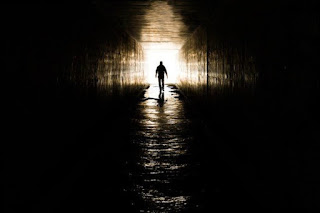 John Chapter 19 includes the following words, ‘It was the day of Preparation, and the next day was to be a special Sabbath. Because the Jewish leaders did not want the bodies left on the crosses during the Sabbath, they asked Pilate to have the legs broken and the bodies taken down. The soldiers therefore came and broke the legs of the first man who had been crucified with Jesus, and then those of the other. But when they came to Jesus and found that he was already dead, they did not break his legs. Instead, one of the soldiers pierced Jesus’ side with a spear, bringing a sudden flow of blood and water. The man who saw it has given testimony, and his testimony is true.’
The Jewish leaders did not want to spoil their holy day with a view littered with crosses on the horizon, so they decided to kill the three men and remove the bodies before sundown. A crucified man generally died of shock and blood loss, but also of asphyxiation because it’s nearly impossible to breathe with your arms above your head all the time. A man dying of crucifixion would therefore heave his body up and down, artificially, rhythmically moving his diaphragm that way instead of breathing properly. It was ultimately useless, of course, because the Romans knew how to kill a man and they always did. So they broke the legs of the crucified men to stop his artificial breathing and accelerate his death. It was ultimately a mercy, but spoiled the theatre of the death.
Incidentally, as a man started dying, so his heart started failing and a large amount of fluid accumulates around the heart. This additional pressure on the heart is also likely to promote death.
A soldier pierces Jesus’s side with a lance. He does not do so to kill him — he has already ascertained the fact of death — but to save his own skin. He doesn’t want his superiors to say that Jesus was still alive. So he proves that Jesus is dead by stabbing up and into the man’s heart. And he was dead as shown by this outflow of blood and water. If he was still alive, the two would mingled but after death they flow separately. Jesus was certainly dead. That’s what the final sentence in the reading means when it says, ‘The man who saw it has given testimony, and his testimony is true’.
Today as we watch Jesus being tortured to death, we are invited to have compassion — to share his passion. We are invited to look at his heart and the way we are his willing subjects. Jesus heart was filled with love. As he approached Jerusalem he wept for the lost. He wept again at the graveside of Lazarus. The human heart of Jesus was somehow superimposed on the heart of God, the two beating within the one chest of Jesus the God–man of Nazareth.
If we are to share the love of God, we need to love as he did. We therefore need to be more like Jesus. We need to have the love of God beating inside our hearts, beating like a separate heart within our own chests. And, miraculously, we can. St Paul was a rabbi and a teacher, so he will have known the Law intimately. That’s one theory of why he’s so obsessed with writing his own lists. In Galatians 5, he lists the fruits of having the Holy Spirit dwelling in a human heart, and the first on the list is love. The list in full says, ‘The fruit of the Spirit is love, joy peace, patience, kindness goodness, gentleness, thankfulness, and self-control’. But elsewhere he lists the gifts of the Holy Spirit, so he’s thinking more supernatural in scope and power. And the first on that second list is also love. So love is a fruit and a gift of the Spirit. If you have the Spirit, you will love.
Posted by Revd_Paul_Monk at 09:30 No comments: 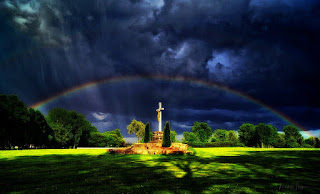 Jesus’ body was suspended in space. The soldiers slowly let his body descend, so the bar across his ripped shoulders lowers into place. His body would have sagged, with all the weight upon the two crude copper nails through his writs.

He would probably have passed out with the pain. That’s why the executioners gave their victims wine in which myrrh had been dissolved. It acted as a crude painkiller. It’s not that they were kind or wanting to relieve Jesus’ pain. Quite the opposite: if the pain of crucifixion was too savage, the victim would die immediately of a heart attack. And where’s the sport in a short-lived spectacle; where’s the deterrence? You want to maximise the horror to inhibit anyone thinking of copying this would-be messiah.
Jesus’ feet were nailed to the upright part of the cross. One foot was pushed on top of the other, almost at right angles. That action alone was enough to dislocate a hip. And then a single long nail driven through both ankles. There was probably a pre-drilled hole in the tree, to make it easier for the executioner: a foot of solid copper penetrating first one ankle then a second and, finally, fitting neatly into a socket in the wood.
Some artists draw Jesus with his feet positioned on a small footrest. Not true. The footrest is the nail itself. To alleviate the pain in his wrists, Jesus would place his weight on the nail through his ankles. When the pain in his ankles was too appalling to bear for one second longer, Jesus would have relaxed his legs and taken the strain onto the nails through his shattered wrists. And then back and forth, shifting the pain every minute or two. It was designed to look barbaric and inspire absolute horror.
Today as we watch Jesus being tortured to death, we are invited to have compassion — to share his passion. So we think about our own feet. Feet are the primary means of locomotion. We get to our location using our feet. Do they take into forbidden places or the places God tells us to frequent. Do they walk or press the accelerator in a polluting car? Are they the vehicle for sin or holiness, our own pleasure or the good of others (the two can be the same). Do our feet move us toward God or away from God? Do we use our feet to demonstrate our Christianity or contradict?
As seek compassion, do we use our feet for good or to display selfishness?
Posted by Revd_Paul_Monk at 09:29 No comments: 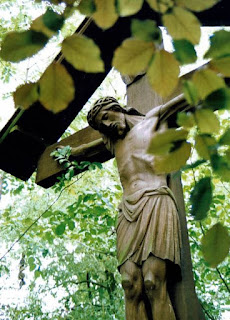 In John chapter 19, we read these words in verse 18: ‘There they crucified him, and with him two others — one on each side and Jesus in the middle.’

We’re witnessing a multiple execution, which was quite common at the rime. It got rid of more criminals was therefore more efficiently. In fact, we know of one execution in which the Romans crucified a man every hundred yards along the thirty-mile road between Jericho to Jerusalem. This avenue of death became known as ‘The way of the cross’ — a phrase that appears in the New Testament, maybe with this double meaning.
Crucifixion was so common a method of execution that John the Evangelist felt no need to explain what it involved. His listeners would have known all too well. Everyone had a friend who (rightly or wrongly) has been murdered that way by the Romans. Maybe their family members had been crucified? It explains why the Romans are hated so much—imagine seeing your innocent relatives dying in so barbaric a fashion.
The Romans crucified a man this way: he usually had a massive, heavy horizontal beam strapped across his shoulders and behind his head. It was tied in place with thick rope around his biceps, so his hands were technically free. Often, the condemned man was led through the streets like a dog on a lead, led to the place of his execution. At the site of his death, the man was laid on his back and his hands nailed to the beam. Everyone within a hundred yards would have heard his scream of pain, his excruciation.
Once nailed to the crossbeam, the soldiers hoisted their victim into the air with the crossbeam across his shoulders, then lowered into a deep groove or notch cut into the upper face of a tall, dead tree. The cross was therefore more like a ‘T’ than a cross. Incidentally, it also explains why St Paul talks about Jesus dying ‘on the tree’.
Although I said the Romans nailed the victim’s hands to the cross beam, in fact the nails were generally driven through his wrists. First because you can’t break free, but could if the nail was located on the palm side of a person’s wrist; but also because it hurts more this way. The crucifying nail destroys the nerves of the hands and arm. It’s no coincidence that the word ‘excruciating’ come from the Latin, ‘of the cross’ — ex cruxio … Never again will this man use his hands — the nails of crucifixion don’t just immobilise the hands, they destroy their scope for future usefulness.
Today as we watch Jesus being tortured to death, we are invited to have compassion — to share his passion. We see his carpenter’s hands nailed to wood. We see how the hands he used to effect healing are now ripped and bleed. We see how the hands that (as the modern hymn says) ‘flung stars into space’ are pinned and cannot even move a fly from his sweat-encrusted brow.
And we think about our hands. We use our hands to create and to break. Some of us use our hands as we speak to communicate, but do we also communicate rejection and malice as well as good. A modern comedian introduced into our language the phrase, ‘Speak to the hand!’ What are the words we write with the same hands with which we eat? Do we feed ourselves food and use our hands to type bad things.
One final thought then: if our hands were immobilised to a cross, fixed, crippled and unable to move — unable to do either good or bad, would it make the world a better or a worse place?
Posted by Revd_Paul_Monk at 09:27 No comments: