The Third Station: Jesus is condemned by the Sanhedrin 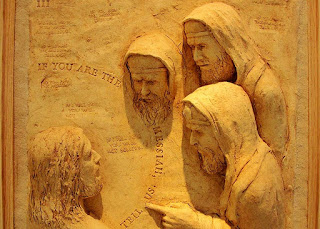 The Jewish authorities were paranoid. They had to be. The hated Roman overlords controlled everything. Without Roman permission, they were powerless and could do nothing. That’s why it was such good sport to try and force Jesus into inciting the common folk against the Romans. The Jewish leaders only had to catch Jesus suggesting something illegal such as rioting, and he instantly became dead meat, literally.
Roman control was absolute. They and only they controlled the courts and major apparatus of the Jewish legal system. Only the Romans had the power of life and death.
It got worse. The Jews regarded the Passover as central to their religious rites, because it was the day when the High Priest entered the Holy of Holies to make atonement for the people. For that reason, it was both a legal and a religious event. The High Priest had to obey the Law perfectly if God was to approve the atonement sacrifices, following the letter of the Law. He had to wash properly beforehand. He had to say the right prayers. And he had to wear the correct robes which included the ephod and breastplate.
The Romans knew how to keep order. They knew the Day of Atonement was the highpoint of the Jewish year, and the way everything depended on the High Priest performing the Law. So they kept the robes of the High Priest under lock and key. That way, they could veto the Passover celebrations if they wanted to; stated another way, in the days before the Passover, the Romans had only to suggest they might not cooperate and the Jewish authorities became extremely pliable. A few things were utterly non-negotiable of course, such as Roman personnel inside the Temple, but otherwise the Jewish leaders would agree to anything whatsoever.
And then Jesus comes along causing his usual trouble. He enters the city as Messiah and King on the first Palm Sunday. He cleanses the Temple and clears away the special coins needed to pay the Temple Tax. The leaders need to stop Jesus and stop him now; too much is at stake.
So the leaders come to Pilate. They beg him to rid them of Jesus because nothing must get in the way of the Jewish rites. Stated a little unfairly, they are desperate to fulfil the Law: they want their atonement so much they try to stop The Atonement.
How like us. So often we do anything to stop anything anyone breaking our rules, our ways of doing things, our right to exercise absolute control that even Jesus gets in the way.
Posted by Revd_Paul_Monk at 09:06