The Tenth Station: Jesus is crucified 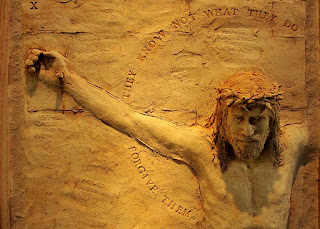 The salvation of the world was achieved through a piece of timber, so we’ll now think about the history of that timber itself.
God is all-knowing and therefore knew that one particular seed from one particular Palestinian tree would one day fall to the ground, germinate, and thence grow into a tall and beautiful tree. Later, that tree would be cut down — maybe by Roman command and, if so, probably using impressed Palestinian labour. That labour involved local men — carpenters — supervised by the hated regional superpower, scrutinised closely as they transformed the raw beauty of a living tree into that strange, savage means of execution. It’s possible that Jesus himself and his carpenter father would have been forced to work at making crosses in this way. At least one of the medieval mystics wondered aloud and at length, asking if Jesus had, at knifepoint, made his own cross. This history is, then, the way of (one, at least) cross.
This image of Jesus making the means of his own execution may haunt or upset us, but it pales beside the appalling thought that we do so too. I sin and you sin. I sinned yesterday; I sin today; I will sin tomorrow … and the same for you. Every time we sin, we further enforce a spiritual death sentence.
When my physical body dies, my spirit will leave my flesh and stand before God. He will assess me and pronounce judgement: live or die, in or out of heaven. It’s grotesque but he warns us continually.
In a real sense, though, God does not judge me; I do. I choose my own judgement and God looks on. Sometimes heaven resounds with his joy at my actions and sometimes it weeps in sorrow. Either way, much later and coinciding with the end of my life, it’s not so much that God pronounces his judgement as God ratified my own choices. I have made my own cross.
Viewed this way, judgement is no longer a God being high-handed with my eternal future. Nor is it a matter of an omnipotent God demonstrating that he knows everything. Furthermore, when viewed this way judgement cannot be regarded as unfair because God looks at what we have done.
The salvation of the world was achieved through a piece of timber, yes; but my own personal salvation is the result of my own choices. I make my own cross
Posted by Revd_Paul_Monk at 10:59