The colours of Advent


In most western denominations, violet is the correct liturgical colour during Advent; so the priestly vestments, altar-frontal, and lectern trappings, etc., are all violet. Some churches denote Advent and Lent with differing shades of purple: Lent employs a dark and somewhat dry shade (while the Advent colour is lighter, richer and seems to glow more. The former colour is like the permanganate beloved by school chemistry teachers while the latter seeks to emulate Tyrian Purple.
It is common to hear the ideas underlying Advent discussed in terms of this violet colour. They centre round Jesus returning as judge and king; and earthly rulers demonstrate their power with expensive trappings to prove their wealth. And the most expensive dye in the ancient world was Tyrian Purple, the use of which became the ultimate status symbol. It was expensive because it derived from the Murex brandaris water snail, and twelve-thousand of them yields no more than 1.4 g of pure dye, which is ‘enough to colour only the trim of a single garment’.[1] The Imperial Byzantium court issued laws to control the production of the dye and restrict tightly those who could wear it. By the late ninth-century, a child born to a reigning emperor was declared to be porphyrogenitos, ‘born in the purple’. So the Church anticipates the Parousia with purple. 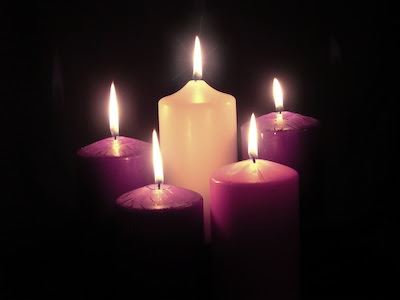 Blue is an alternative colour for Advent in the old Sarum rite, although this tradition is possibly diminishing in usage.
The third Sunday of Advent is called ‘Gaudete’ Sunday. The name comes from the Latin ‘to rejoice’ but also from the first line of the Introit (the traditional entrance prayer) for the Mass or Worship Service for that day. In the Churches espousing a more liturgical tradition, liturgical colour of Gaudete Sunday is rose; but this colour causes problems. The obvious change from violet signals a slight pause from the penitential spirit of Advent. It is therefore natural for the third candle of the Advent wreath, when representing joy, to take this hue rather than purple. But the Churches following the second set of Advent themes above, will prefer to use rose for the Virgin Mary; the message of John the Baptist is certainly not a respite from the theme of penitence.
[1] David Jacoby, ‘Silk Economics and Cross-Cultural Artistic Interaction: Byzantium, the Muslim World, and the Christian West’ Dumbarton Oaks Papers, 2004, 58, 197–240. He cites this nugget on p. 210.
Posted by Revd_Paul_Monk at 13:38