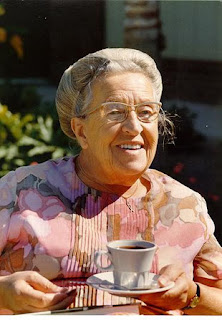 Cornelia ‘Corrie’ ten Boom was born the youngest of four children, on 15 April 1892 in Haarlam, near Amsterdam, in the Netherlands. The ten Booms were devout Christians who believed in service to God and their fellow man. Her father was a watchmaker who was often so engrossed in his work that he forgot to charge his customers.
Corrie also trained to be a watchmaker and, in 1922, became the first woman licensed as a watchmaker in Holland. She lived a normal, peaceful life for the next eighteen years, working beside her father in the shop. All her family were devout members of the Dutch Reformed Church, and their faith inspired them to serve their society.
Then, in May 1940, the Nazis invaded the Netherlands, and began their occupation. Along with her father and other family members, Corrie helped many Jews escape the Nazi Holocaust during World War II by hiding them in her closet. She was imprisoned for her actions.
The ten Boom family always operated a form of ‘open house’ for the needy. So when their neighbours — a Jewish family named Wells — were at risk, the ten Booms hid them in their home before helping them escape from Holland. In May 1942, a Jewish woman came to the ten Boom home to say her husband had been arrested by the Nazis: ‘Could anyone help?’ Corrie’s father let the woman stay with them, saying, ‘In this household, God’s people are always welcome.’ These acts of kindness and bravery kickstarted ‘the Hiding Place’ — hence the name of her most famous book, The Hiding Place, which is a biography that recounts the story of her family's efforts.
The ten Boom family became key members of the resistance movement. They made their home a safe house for those whom the Nazis hunted. They built a false wall across Corrie’s bedroom to create a secret room that hid refugees. Over the next two years, those refugees included Jews and members of the Dutch resistance. Often, there were as many as six or seven extra people illegally in the house at a time, as well as any number of transient folk, who would be harboured there before being moved to other safe houses.
Corrie formed and led ‘the Beje group’ — a secret network to provide extra safe houses for refugees. During 1943 and the first two months of 1944, the ten Boom family and their network rescued about 800 Jews and protected countless members of the Dutch underground.
The family was betrayed on 28 February 1944. The Gestapo raided the ten Boom home and arrested 35 people, including the ten Boom family. The Nazis did not find the secret place in Corrie's bedroom wall where six people — four Jews and two members of the Dutch resistance — were hiding. They remained in the cramped space for three more days before rescue by the resistance.
The Nazis imprisoned all the ten Boom family. Most died quickly, but Corrie and her sister were sent to the infamous concentration camp at Ravensbruck.
In the prison, the sisters led secret worship services. They whispered hymns and led prayers, then read from a Dutch Bible they sneaked into the camp, translating aloud into German.
Twelve days after her sister died of starvation in the camp, Corrie was saved by what many believe was a miracle. A clerical error meant Corrie was released from Ravensbruck a mere week before all the women of her age were rounded up and executed.
Corrie returned to Holland after the war. She set up a rehabilitation centre for concentration camp survivors. In 1946, at the age of 53, Corrie returned to Germany, where she met two former Ravensbruck guards and publicly forgave them for their part in the concentration camp atrocities.
An ancient Jewish tradition says that only the blessed are given the honour of dying on the same date they were born. Whatever the truth of this belief, Corrie ten Boom died on her 91st birthday, April 15, 1983.
Posted by Revd_Paul_Monk at 10:31