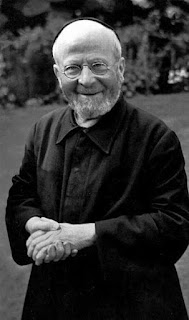 William Sirr was born into a well-to-do English–Irish family in 1862. Soon afterwards, a severe financial disaster changed the family fortunes when he was still very young and his parents divorced.
William received an elementary education and then held a series of relatively menial jobs as a vintner and as a clerk for an architect. All the time, he spent his considerable energies in organising events and missions for his local Church, and leading classes for children.
He felt the call to become a priest. The Diocese of London recognised his call, and even broke its own rules to enable him to train. For example, his poor schooling meant he was completely incapable of reading Latin.
He spent several years as a priest in the very poorest areas of London’s East End, all the time inspiring great love and admiration.
In the early years of the twentieth century, Father William moved from parochial life to become a friar of the Society of the Divine Compassion (SDC), based in the East End. This new life was centred on prayer and a deeper commitment to holy poverty. It was good work. He quickly rose to become the superior of the Society of the Divine Compassion which, perhaps ironically, meant he spent more time in mission and administration and less time in prayer. But it did demonstrate his abilities.
Father William felt called by God to leave his work in the East End to begin a contemplative life of prayer in a more secluded setting. He spent several years with the Society of St John the Evangelist in Oxford— the so-called ‘Cowley Fathers’ — to test this new aspect to his vocation. All this time he felt a call to an ever-closer commitment to prayer and seclusion.
In the winter of 1918, an elderly squire gave him the stables attached to a manor house in Glasshampton near Worcester (built in 1810 but long since ruined by fire) and with many acres of land. With great joy, he moved there. His aim was to establish the first completely enclosed religious house for men in England since the Reformation.
For nearly 20 years Fr. William lived here, leading a life of silence, manual labour, contemplation and intercessory prayer. He renovated the building to make it habitable again. Almost single-handedly, he created an abbey of great beauty and simplicity, and gave it the dedication, ‘St Mary at the Cross’. The chapel in particular is a holy place, and is a simple room with white-washed walls and an altar of red sandstone.
Father William’s goal was to provide a place capable of demonstrating God’s love through hospitality and prayer. He hoped to found a contemplative community at Glasshampton but, as the years passed, it became clear that no community was going to form around him. His life of stern self-discipline was not easy to follow and none of those who came stayed. Nevertheless, many people came to stay for shorter or longer periods of time, finding in him a spiritual director of great holiness.
Father William died in 1937.
In some ways, his life seemed a failure: he attracted no ‘sons’ to take on the spiritual life he chose for himself and he created no new order of monks. But he did greatly influence a great many other great women and men to follow his example and become giants of the spiritual life.
And in 1947, the Anglican Society of Saint Francis — the Anglican Franciscans — were invited to live at Glasshampton. It became again a house of prayer, but of a different and maybe less austere way of life.

For more information, go to:
http://anglicanhistory.org/aus/francis_life2003/04.html
http://www.franciscans.org.uk
William of Glasshampton: friar, monk, solitary, by Geoffrey Curtis, SPCK, 1947 and 1978.
Posted by Revd_Paul_Monk at 06:12