William Temple was born in 1881 in Exeter, Devon. He was the second son of Frederick Temple (1821–1902), born just before his father became Archbishop of Canterbury.
He graduated from Oxford with a superb degree then stayed in Oxford to teach. While still teaching, he was ordained in 1909. 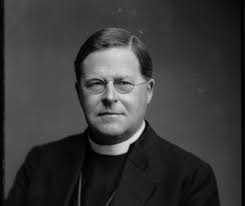 Between 1910 and 1914, Temple was Headmaster of Repton Public School after which he returned to ministry as a full-time cleric. After a short time in Parish life, Temple served first as Bishop of Manchester (1921–29), then Archbishop of York (1929–42) and finally as Archbishop of Canterbury (1942–44).
Temple was a tireless teacher and preacher. He was also a prolific writer. Today, he is perhaps best known for his book Christianity and Social Order which he published in 1942 soon after becoming Archbishop of Canterbury. The book attempted to combine socialism and faith. By it, he wanted to create an Anglican social theology capable of promoting a just post-war society. He also used it to weld together his defence of the working-class movement with economic and social reforms. It sold prodigiously and made a huge impact which led directly to Clement Attlee’s post-war Government creating the welfare state.
William Temple held a dizzying array of other offices, all of which were underpinned by his desire to improve Britain — the country, its people and its national Church. He was the first President (1908–1924) of the Workers’ Educational Association; he was chairman of an international and inter-denominational Conference on Christian Politics, Economics and Citizenship held in 1924; he participated widely in the ecumenical movement that sought to bring together the different Christian denominations. He was one of the Anglican delegates to the World Conference on Faith and Order held in Lausanne in 1927, and helped to prepare and chair the second World Conference Faith and Order in
Edinburgh 1937. He is also noted for being one of the founders of the Council of Christians and Jews in 1942.
Temple worked tirelessly to bring together the various British Churches to support the Education Act of 1944. This same energy led him to form the British Council of Churches and help form the World Council of Churches.
Temple died on 26 October 1944 and remains the last Archbishop of Canterbury to have died while in office.

The Church is the only society that exists for the benefit of those who are not its members.
William Temple