Characters in the Bible
Isaiah 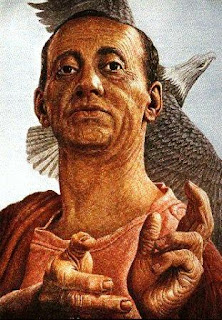 Isaiah is one of the most important figures in the whole of the Old Testament. In translation, his name means ‘God is salvation.’
We know much about Isaiah from two types of source: firstly, from the longest book of prophecy in the Old Testament, which now bears his name — traditionally considered to be its author, although this idea is simply not possible.
We also know of Isaiah from the historical writings of the Old Testament, for example 2 Kings 19:2; 2 Chronicles 26:22; 32:20–32. 2 Chronicles 26:22, refers to ‘Acts of Uzziah … written by Isaiah, the son of Amos, the prophet.’ In fact, the Old Testament mentions four other people with the same name (in Ezra 8:7; 8:19; Nehemiah 11:7; 1 Chronicles 26:25); and the names Jesaia (1 Chronicles 25:15) and Jeseias (1 Chronicles 3:21; 25:3) might also refer to him.
Isaiah was a Judean prophet in the eighth-century bc, born to a man named Amos (Isaiah 1:1). His central theme was to urge the people of Judah to turn back to God. He declared that all the world belonged to God and that God would destroy it if they failed to repent. He said, ‘The land will be completely laid waste and totally plundered. The Lord has spoken this word’ (Isaiah 24:3).
Isaiah married a woman known as ‘the prophetess’ (8:3). We do not know why she was given this name. Some believe she may have carried out a prophetic ministry in her own right, just like Deborah (Judges 4:4) or Huldah (2 Kings 22:14–20). Others say, however, she was simply the wife of ‘the prophet’ (38:1), and was not herself endowed with prophetic gifts.
Isaiah was probably about twenty years of age when he began his public ministry. He was a citizen — perhaps a native — of Jerusalem. His writings give unmistakable signs of high culture: he was an official prophet at the Royal Court, and prophesied during the reigns of four of the Judah kings: Uzziah (or ‘Azariah’), Jotham, Ahaz, and Hezekiah (1:1). Uzziah reigned fifty-two years in the middle of the eighth-century bc, so Isaiah must have begun his career a few years before Uzziah’s death — probably in the 740s bc. He lived until the fourteenth year of Hezekiah (who died in 698 bc), and may have been contemporary with Kings Manasseh; so Isaiah seems to have prophesied for at least forty-four years.
But even this long life is too short to allow us say that he wrote everything in what we now call ‘the Book of Isaiah’. The later chapters (i.e. 40–end) were certainly written a century or so later, by an anonymous prophet who copied Isaiah’s style but preached a message vastly more hopeful than anything seen before.
In his youth, Isaiah must have been seen the invasion of Israel by the Assyrian tyrant, King Tiglath-Pileser III (2 Kings 15:19). He would have witnessed first-hand the subsequent conquest and (what we would now call) genocide and crimes against humanity.
Some of Isaiah’s most moving poetry was directed against King Ahaz: despite the escalation of the war, and the atrocities against the Judean people, King Ahaz refused to co-operate with the kings of Israel and Syria to oppose the Assyrian aggressor, and was on that account attacked and defeated by Pekah of Israel and Rezin of Damascus (2 Kings 16:5; 2 Chronicles 28:5–6). Having been humbled in this way, Ahaz sided with Assyria, and sought the aid of Tiglath-Pileser against Israel and Syria. In consequence, Rezin and Pekah were both conquered and many of the people carried captive to Assyria (2 Kings 15:29, 16:9; 1 Chronicles 5:26).
Both Jewish and Christian traditions believe that Isaiah was killed by being sawn in half with a wooden saw. Some interpreters believe that this is what is referred to in the New Testament verse Hebrews 11:37, which states that ‘some prophets’ were ‘sawn in two’ — presumably as a punishment for opposing the Assyrians.
Posted by Revd_Paul_Monk at 12:07