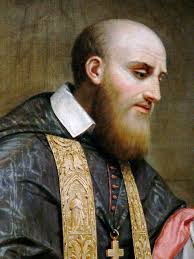 Francis de Sales was a Bishop of Geneva. He is best known for his gentle approach to the religious divisions in an era characterised by religious divisions between the Catholic and Protestant Churches.
He was born into a noble family in the Duchy of Savoy on 21 August 1567 in what is today Haute-Savoie in France. He was baptised ‘Francis Bonaventura’ after two of the greatest Franciscan saints.
In 1583, Francis went to study in a Jesuit institution in Paris to study rhetoric and the humanities. Within the year, Francis attended a theological discussion about predestination that convincing him he was damned.

It caused a personal crisis of despair which made him physically ill. He was even bedridden until December 1586 when, with difficulty, he visited the old parish of Saint-Étienne-des-Grès in Paris, where he prayed before a famous statue of Mary. He rededicated his life to God; took a vow of chastity; and soon became a tertiary of the Minim Order.
Francis ultimately concluded that God had good in store for him, because (1 John 4 says) ‘God is love’. His faithful devotion to the God of love not only removed all his doubts but also influenced the rest of his life and his teaching.
Francis completed his studies in 1588 and joined the University of Padua in Italy to study law and theology. He also decided to become a priest. He was consecrated as Bishop of Geneva, but he continued to live in in what is today France because Geneva was then under Calvinist control and therefore closed to him. His diocese became famous throughout Europe for its efficient organisation, zealous clergy, and well-instructed laity. He worked closely with the Order of Friars Minor Capuchin, which was very active in preaching the Catholic faith in his diocese.
Francis’ way of teaching Catholic spirituality is often referred to as the ‘Way of Divine Love’, or the ‘Devout Life’ — the phrase comes from a book he wrote of a similar name: Introduction to the Devout Life. One ancient story says Francis saw a vision of St Francis of Assisi on the south shore of Lake Geneva.
During his long years as a bishop, Francis acquired a reputation as a spellbinding preacher and something of an ascetic. His motto was, ‘He who preaches with love, preaches effectively’. Certainly, his goodness, patience and mildness became a byword for holiness.
All Francis’ writings suggest a quest for holiness, especially in his most famous book Introduction to the Devout Life, which — unusual for the time — he wrote specially for laypeople. In it he suggested the most potent way of progressing in the spiritual life is charity rather than penance. Francis also left a mystical work, A Treatise on the Love of God and many letters of spiritual direction. The letters to his disciple Jane Frances de Chantal were compiled to form the book Letters of Spiritual Direction. The book is a profound display of common sense and good psychology both applied to the pursuit of holiness and the love of God.
In December 1622, the Duke of Savoy required Francis (in his role as bishop) to accompany him on a Christmas visitation of his vast domain. Francis suffered a stroke in Lyon from which he died on 28 December. He was 55 years of age. He was buried on 24 January 1623 in the Monastery church of the Visitation in Annecy, which he helped found.
Francis was called ‘the Gentleman Saint’ after his patience and gentleness. He was beatified in 1661 and made a saint four years later.