Bible manuscripts
In Europe, easy printing with moveable metal type was invented in the 1440s. Before then, all books were written by hand. Most books were written on parchment, which was made by carefully taking the skin of an animal, scraping off the hair, boiling in alkali to remove the fat, and smoothing the surface to prepare it to take ink. The best parchment was made the skin from young calves, called ‘vellum’. 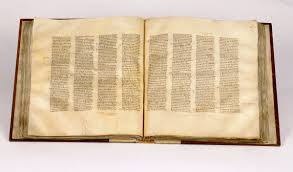 Producing a complete Bible required the skins of hundreds of animals because it’s such a big book. It also required a great many highly-trained scribes, so making a whole Bible was a big undertaking and horribly expensive. The faith inherent in the pages of a Bible made it doubly precious.
For all these reasons, books and especially Bibles were treasured. A significant fraction of all the books even written by scribes were of the Bible or of portions of it.
The oldest complete Bible is the Codex Sinaiticus (above), and was written in the fourth century ad. It takes its name from the Mount Sinai in Israel, because it was discovered in St Catherine’s Monastery which is located on the higher slopes of that mountain. We know of other, older Bibles but they’re incomplete — for example they contain only the New Testament — or are badly damaged through their extreme old age.
Posted by Revd_Paul_Monk at 12:47